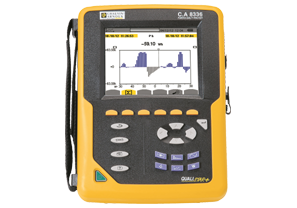 The C.A. 8336 (Qualistar+) is a three-phase network analyzer with colour graphic display and built-in rechargeable battery.

It plays three roles, and can be used:

The measurement uncertainty of the device is better than 1% (not counting the uncertainties due to the current sensors). The device is also very flexible, with a choice of sensors allowing measurements ranging from a few milliamperes (MN93A) to several kiloamperes (AmpFlex®).

The device is compact and impact resistant.

The ergonomics and simplicity of its interface make using it pleasant.

The C.A 8336 is intended for the technicians and engineers of electrical installation and network inspection and maintenance teams.

The principal measurements made are:

The RMS values of AC currents up to 10,000 amperes (neutral included). By using the ratios, the device can measure currents up to hundreds of kiloamperes.

The DC components of voltages and currents (neutral included).

Calculation of the harmonic loss factor (FHL), application to transformers in the presence of harmonic currents.

Calculation of the K factor (KF), application to transformers in the presence of harmonic currents.

Measurement of the RMS distortion value (d) for the current and the voltages (excluding neutral).

Measurement of the long-term flicker of the voltages (PLT) (excluding neutral).

Display of waveforms (voltages and currents).

Inrush Current function: displays parameters useful for study of the starting of a motor.

Instantaneous current and voltage at the instant designated by the cursor.

Maximum instantaneous absolute value of the current and of the voltage (over the entire starting time).

RMS value of the half-cycle (or lobe) of the current and voltage (excluding neutral) on which the cursor is positioned.

Instantaneous network frequency at the instant designated by the cursor.

Time at which starting of motor commenced.

Transients function. Detection and recording of transients (up to 210) between user-defined start and stop dates and times.

Recording of 4 complete cycles (one before the triggering event and three after) in the 8 acquisition channels.

Trend recording (data logging) function. 2GB memory with date-stamping and user-defined start and stop dates for recording, with a maximum of 100 recordings. Display, in bar chart or curve form, of the means of many parameters vs. time, with or without minima and maxima.

Alarm function. List of recorded alarms (up to 16,362) exceeding thresholds defined in the configuration menu. User-defined

Choice of management of switching off of the screen.

Choice of display in night mode.

of calculation of the K factor, choice of reference for the level of harmonics, PLT calculation (sliding or not).

Choice of distribution system (single-phase, two-phase, three-phase with or without neutral) and of the connection method

Erasure of data (total or partial).

Display of current sensors detected not detected, not managed, simulated or impossible to simulate (2-element connection method) . Setting of voltage and current ratio, of the transduction ratios and of the sensitivity.

We Are Here To Assist You 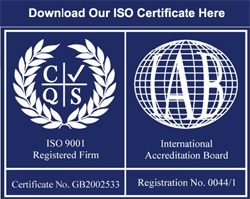